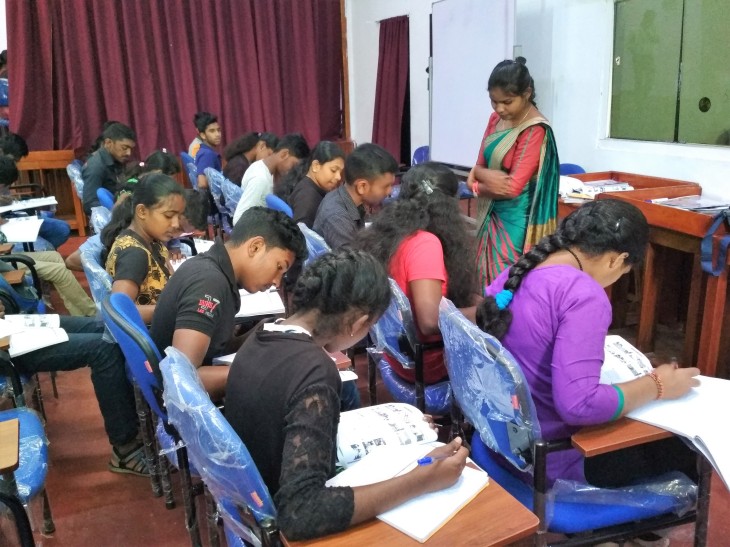 It was a month full of activities and excitement. The students who commenced their classes in September 2017 had the last month of classes. They were eager to complete their course successfully. Many of them were expecting the results of GCE advanced level exam by the end of December. The Centre and the staff feels quite pleased with the improvement the students have shown.The four months period where the students were a part of Loyola Campus education programme, has brought a number of changes in them. It is not limited to their ability to speak in English alone.

The students had their final exam on 18 December. Loyola Campus- Hatton also arranged a parent-teacher meeting on 19 December. It was helpful in a number of ways. The parents had an opportunity to witness to the learning environment of the students and also discuss with the facilitators and staff about areas of their concerns. The annual staff evaluation was on 20 December. The facilitators and staff evaluated the administration of the courses at Loyola Campus- Hatton and the strengths and weaknesses identified during the last couple of months. The students had their Christmas celebration and farewell on 21 December.

The students were also busy writing articles for the upcoming issue of Vidyana, Loyola Campus magazine. As the theme proposed, ‘Forgotten Heores’, the students wrote about people and communities in their locality they consider had witnessed heroic qualities. One such group was the the sanitation workers who keep Hatton clean. To write the article about them, a group of students along with the Dean of Studies Sr Sahaya Mary FMM visited Aluthgama village and interviewed the people. Such efforts gave opportunity to interact with the marginalized and motivated them to be people oriented.

Fr. Premkumar SJ gave this workshop on 15 and 21 December. He started the workshop from his own captivity story in Afghanistan and explained about the sources of the conflict in the world and the need for peace building in the world especially in Sri Lanka. Since women and children are the worst affected due to conflicts, they become natural promoters of peace. The students were asked to imagine Sri Lanka in 2050, Sri Lankan education in 2050 and women in Sri Lanka in 2050. The students were actively involved in preparing charts and presentations on their vision of Sri Lanka 2050. The ultimate aim of Jesuit Worldwide Learning (JWL) and Loyola Campus Sri Lanka is to bring reconciliation in the world. This workshop attempted to bring awareness among the students on reconciliation and peace building.